The one thing I was quite certain of when I started off this journey was that the one stamp I definitely wanted in my collection was the stamp featuring Calvin and Hobbes. I went to two different stamp shows and nobody had one for sale.  I managed to find a plate block of about 20 stamps featuring four copies each of the Sunday Funnies stamps both times I was there.  The price was 25 dollars and I didn’t feel like spending that amount of money when I only wanted one, possibly two of the stamps.

They mentioned writing them before the next show, but I didn’t know if or when I would go to a show again. Naively, I believed that I wouldn’t go to so many shows.  Though I now think differently, at the time, I really wanted those stamps and didn’t want to wait for a show–or try to remember which dealer said I should call or email.

So, I did what most people do nowadays. I went online and found one.  I also found a first day cover that I thought looked attractive.  With shipping, this was a less attractive proposition than I would have liked, but I did get the stamps and the first day cover.  This pretty much sealed the deal as far as really starting in this hobby. 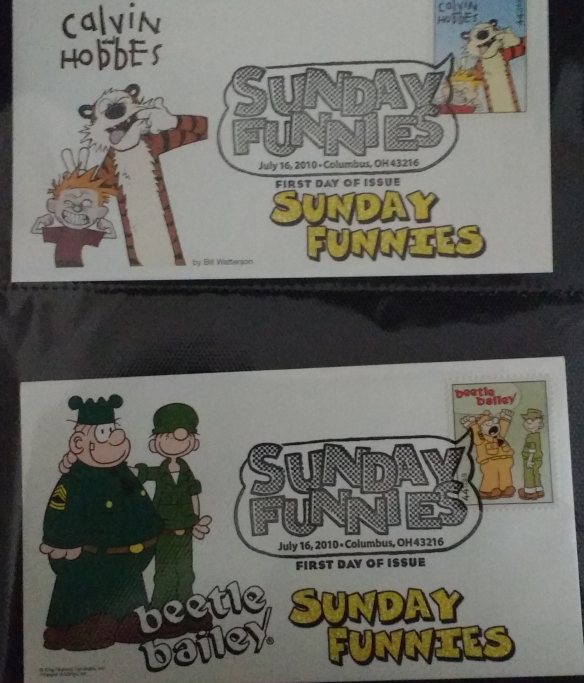 Why this particular stamp you ask? Well, I absolutely adore Calvin and Hobbes.  I have all the books.  I have the one magazine he gave a fantastic interview to.  I have the novel about the quest to meet Bill Watterson.  The strip speaks to me like no other comic strip has before or since.  It was brilliant.  I just had to have this stamp.